FEATURED: Watts House Project’s GET UP 2 GET DOWN in Los Angeles 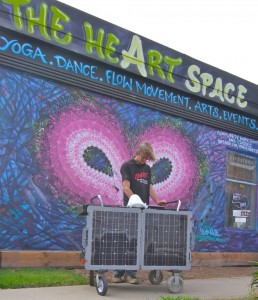 Saturday, August 10, 10am – 1pm: GET UP 2 GET DOWN is a community beautification effort organized in conjunction with short live performances in the area around the Watts Towers. We need volunteers! BBQ and art activities will be provided for those who participate.  Support provided by Food 4 Less, Ralph’s, LA’s Office of Community Beautification and other businesses is the area. Location: Watts House Project, 1726 E. 107th Street, Los Angeles, 90002.

We invite you to join us in “GET UP 2 GET DOWN: Saturday Morning Neighborhood Clean-up” is organized by Watts House Project and MKE<->LAX.  This unique neighborhood clean-up combines the collective action of community beautification with live music and performers.  The clean-up is one-part civic duty and one-part performance: volunteers from the Watts community and around Los Angeles will walk along a predetermined route to pick up debris on the sidewalks and streets and, at random moments, a group of performers participating in the clean-up will stop and play sets of music or spoken word.  We plan to recruit additional volunteers along the way and culminate the clean-up at Watts House Project where participants will eat BBQ and have additional opportunity to take part in art activities. 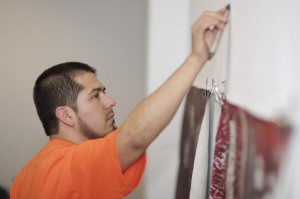 Watts House Project is collaborating with MKE<->LAX to create this multi-level experience that entails an element of community engagement, neighborhood beautification, and artistic expression.  Altering the visual and audio experience in Watts is only part of the objective. MKE<->LAX and WHP are committed to community engagement through the arts and reinterpreting the environment through agency and creativity.

Artists and performers participating:
SYCONS
The SYCONS are Solar Powered DJs, audio/visual artists, and alt energy, alt transport activists. The group combines their passion for music with solar tech to delight and inform crowds at events around the country. The humans behind the group, Sycon CD (CD Gee) and Sycon MX (MX Farina) use everything from laptops, turntables, samplers, digital audio mixers, portable PA systems all powered by their solar powered DJ Station along with solar backpacks and solar briefcases. Join The Sycons mailing list for updates:SyconMusic@gmail.com

La Chamba
La Chamba began with a love and respect for Peruvian Chicha music. Its deep Amazonian Cumbia, Salsa and Afro-Latin groove along with the psychedelic feel instantly inspired them to create their own unique blend of the sound. They were moved not only by its personal and social message, but by the parallels that exist in the pulse of barrios across Latino America.

Coming from humble working-class Los Angeles communities, La Chamba amplifies the realities that make them who they are by adding a rhythm to the daily bustle of life.

Raul Baltazar
Raul lives and works in Los Angeles, CA. and Mexico City, Mexico. He received his BFA in Sculpture and New Genres and Master in Fine Arts/ Public Practice Degree at Otis College of Art and Design.  He has exhibited throughout Los Angeles and internationally.  He is also a performance artist who is currently working on ritual interventions, aesthetics of violence, urban myth and politics of fiction. One of Baltazar’s urban mythological characters is Tochtli 7 (the Aztec bunny) in which is part of a larger project named, The Bunny House.  The Bunny House is an ongoing creative site of artistic production, art venue and informal residency. Currently, Raul is creating work related to systemic violence legal and illegal, aesthetics of violence, specifically in NARCO culture, local and transnational gangs related to US imperialism.

Rodrigo Martí
Rodrigo Martí is a Mexican-Canadian artist whose work is primarily concerned with the aesthetics of political struggle, notions of resistance, self-expression and social engagement. He is working between sculpture, performance and drawing. His practice considers modes of political efficacy in contemporary art and culture production. He explores communality and forms of shared ecstasy has led to thematic streams such as insurgent barricade, the intersection of education and activism, and spatial politics via unsanctioned structures/activities such as festivals. Rodrigo received his MFA in Public Practice from Otis College of Art and Design in Los Angeles, CA.

ABOUT
Watts House Project is an artist-driven neighborhood redevelopment organization, wherein artists and design professionals, in collaboration with the Watts Towers area residents, employ art as an economic and community development engine to promote and enhance the quality of residential life in the Watts neighborhood of Los Angeles. WHP brings residents together in a creative partnership with artists, architects, design professionals, and volunteers to revitalize the neighborhood and re-imagine the environment through inventive programming, community involvement, and functional and creative housing renovations.

MKE<->LAX investigates cultural exchange between two American regions, with Milwaukee and Los Angeles as epicenters, through residencies and public programs. Under the direction of Sara Daleiden, the initiative’s goal is to expand the discussion about cultural exchange across the boundaries that typically isolate ideas regionally. MKE<->LAX’s base intent is to move between regions to ask questions about the influence location, size, market, cultural values and other regional factors have on production of the arts and cultural identity.