ENGAGEMENT: “Vicki, with an i” Discussion at Woodland Pattern EXCHANGE: Lake Effect Radio Interview: From LA to Milwaukee

Sara Daleiden’s first feature documentary with MKE<->LAX collaborators, which we are thrilled is premiering at the Milwaukee Film Festival! Please join us this Sunday for a screening with Q&A and related panel…

This Sunday, October 8
10-11:30am
The Oriental Theater
Cream City Cinema
2230 North Farwell Avenue, Milwaukee, Wisconsin 53202
Sara Daleiden will be available at the Q&A after the screening. This documentary stems from the last four years of work she collaboratively performed as an art and public engagement consultant for the Los Angeles County Arts Commission Civic Art Program as part of their Open Space Creative Graffiti Abatement Project. Weaving connections between social and physical art production as civic engagement, the documentary follows four artist teams in four public spaces (two parks and two libraries) in four neighborhoods in South Los Angeles County. We find it to be a gentle portrait of cultural exchange in an urban U.S. American landscape.
Following the screening and around the corner on the Eastside, Sara will be on a panel moderated by Arijit Sen…
Revitalizing City Spaces through Art and Design
This Sunday, October 8
12-1:30pm
Milwaukee Film Lounge

We imagine there will be more screenings to come in Milwaukee and Los Angeles in the coming year so stay tuned for that if this doesn’t work! 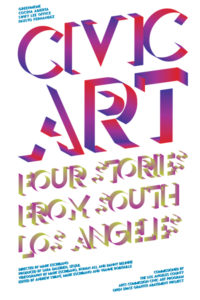